In this day & age, I totally sympathize with anyone who has an unlisted phone number, uses voicemail to screen their calls, etc.  Even with the political campaign over, junk calls still abound.

HOWEVER ... if you are a ham trying to deliver a Welfare radiogram from Puerto Rico, you really hope that the phone number provided is right (not out of date or mistranscribed over the air).

I have one on my hook right now.  The telephone number provided hangs up immediately.  Searches for it list "no results found" so it's probably out of service.

With the help of White Pages Premium, Spokeo & yellowpages/whitepages, I've found two other possibilities.  One at least rings but doesn't answer.  The other is ... well, a Puerto Rico area code, so no help there.  (At least I'm pretty sure I have the right guy!)

We are lucky when the sender provides an email address, too.

The hams who have been sending out practice radiograms such as "welcome" to new ham licensees, etc. ... we have the advantage of knowing our way around the lookup services.  But, at best you find about 60% of the numbers you want & about 1/3 of those are no good.  Not a pretty picture.
Posted by Kate K6HTN at 11:11 AM 1 comment:
Email ThisBlogThis!Share to TwitterShare to FacebookShare to Pinterest

Truth is that, as long as the cell phone system works, there doesn't seem to be much need for ham operators to pass "Health & Welfare" messages ("I'm okay, etc.") between affected members of the population & their out-of-the-area relatives.  If ths cell system is overloaded, people are often able to send text messages.

I do wonder, however, about the FEMA report for hurrican Harvey that listed 4% of the cell towers down & about 5% for homes affected by serious flooding.  My guess would be that these two percentages represent the same geographical areas.  If ham operators had been available to take outgoing messages by, maybe, FRS & GMRS radio, marine radio (in some areas, a lot of people have a boat & a marine band radio) or even CB, they might have been able to offer a useful service.  Many hams were certainly busy supporting local agency emergency communications.  But I'm guessing not all of them.

With hurricane Irma, FEMA didn't list any dead cell towers at all (really?).

Radio Relay International (RRI), a split-off from the ARRL National Traffic System, has a plan in the works to revive something called the National SOS Radio Network, which links up volunteers & the population by the radio services listed above.  RRI would provide the "long-distance" part of the deal.  Such a thing might have been useful.

That's for the OUTBOUND messages, sent by people affected by the disaster to their relatives & friends outside the area.

With the two mainland US hurricanes, we also got a few requests from people "on the outside" who wanted to send inquiries into the affected area.  There were even more requests for such with the "DX" aspect of hurricane Irma, hurricane Maria & also the Mexican earthquake that occurred in the middle of all the wet & windy mess.

"Can hams get a message into Haiti?"  "Well, maybe.  In normal times, Haiti is pretty rare DX!  We can try, just wait a few days."

Generally speaking, INBOUND messages to a disaster area cause more problems than they help.  They are almost impossible to deliver to the recipient, if those people are evacuated or displaced.  This is especially true when the storm is still going on!  (Many people outside don't seem to think of this!)  They (the inbound messages) suck up the time & energy of the hams on the ground, who are trying to support local agencies.  So we try to discourage even taking such messages on.  At the very least, they are likely to be held up for days & the senders need to be informed about this.

However, there were at least two groups that advertized on internet (Facebook, etc.) that they could "queue up" inbound inquiries until such time as conditions improved.  I did make use of one of these.  Outbound messages were being handled right away.  Probably none of this traffic was in the form of radiograms.  The "internet" can extend a long way via radio through use of stand-alone mesh networks & Winlink.  A radiogram is just text, however.  It can ride on an email, but it can also go places other free-form email texts cannot go (on CW, for example).

When "things happen" (TSHTF?), we use the methods available.

Yes, I realize that the Red Cross, Salvation Army & even the hurricane weather nets passed a lot of welfare traffic, for people in their shelters.  Can they get out into the communities also?  RRI seeks a way to be useful in the organized chaos & they should be learning how that's done, this week.  The National SOS Radio Network reboot might do that.  Especially if the volunteers & routings were in place ahead of time.  Routings are RRI!
Posted by Kate K6HTN at 12:16 PM No comments:
Email ThisBlogThis!Share to TwitterShare to FacebookShare to Pinterest
Labels: amateur radio disaster, message traffic, rri, traffic nets

A few weeks ago, I met a guy at the gym who was wearing an ARRL shirt.  Good conversation maker.  We discussed our operating preferences.  I told him I was interested in traffic handling & CW. He said "Oh, are you on 3575 [kHz]?  I used to check into that one."

Traffic nets are usually on 80, 40 & 20 meters, above where most casual ragchews & small operating events occur.  RN6 has been on 3575, tucked nicely below the JT65 (digital) sub-band, which is about 5 kHz wide, going upward.

That has all changed recently, putting RN6 "on the run."  Presumably we aren't the only one.  So non-regulars can find us, we start calling the net on 3575 & then move it out of the way if there is an encroachment.  Normally we didn't have to.

Now there is another related digital band right on top of us.  They don't listen first.  Lately, it seems that JT65 is moving to frequency we normally were moving off to.

It is well known in ham radio that "no-one owns a frequency."  First come, first served.  So we aren't surprised to have to move now & then.  But there are ops on the band who don't listen first to find out if someone is there, things become difficult.  We don't speak the same language, either.  They speak JT65 & we speak CW.

This past weekend was the ARRL Southwest Division Hamcon in Torrance CA.  I did not give a "tech talk" this year, but we did have a table in the hallway & we did pass some traffic.  Besides me, we had Allie Peet K6ATP, Clara Woll KJ6CNO, Grant Gemel KK6AHZ (new ORG STM) & Nancee Darling K8NBD helping out.  Many other traffic handlers stopped by.

Allie K7ATP deserves a special mention, as she is a very new ham (just long enough to get a vanity call).  At an ARES district meeting the Saturday before last, she mentioned an interest in traffic, so I handed her a flier listing out local nets, etc.  She showed up at Hamcon early on Saturday.  I showed her how to help someone fill out a radiogram form.  She originated the first one, for a ham who wandered by.  After that, she did the same for several more, with very few errors.  Smart lady!

It turns out that NOBODY complained or even mentioned that we had the ARRL National Traffic System (NTS) & the Radio Relay International (RRI) banners side by side, despite it being an ARRL convention.  Random people did ask what RRI was.  Not wanting to go into the political history, I just drew an analogy from the time when our landline phones had a local service & a long-distance carrier.  At least in the Western Area, most of the local nets affiliate with NTS & the "long-haul" nets & schedules affiliate with RRI.

Note my traffic cones!  I thought they were a nice touch, but most people didn't seem to get the joke. 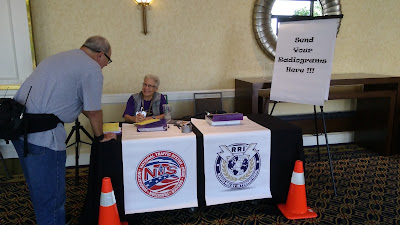 Did I mention that yesterday was National Dog Day?? 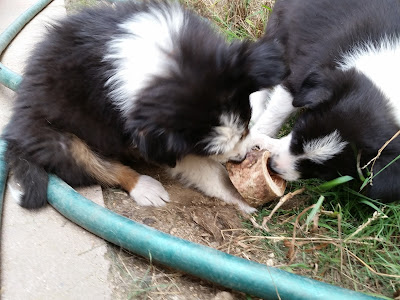 Posted by Kate K6HTN at 1:54 PM No comments:
Email ThisBlogThis!Share to TwitterShare to FacebookShare to Pinterest

Yesterday, I went out to Riverside CA (1 hr + drive each way in freeway traffic) to teach my message traffic handling class, otherwise known as Radio Amateur's TFC School.  Most attendees were hams who volunteer their to to either ARES (Amateur Radio Emergency Service) or the American Red Cross.  They may not be using actual radiogram format in their drills or disaster responses, but I claim that the skills learned as a traffic handler are widely useful, especially if you end up being Net Control station on a net.

One story was recounted by one of the organizers.  Back in 1989, when the San Francisco Bay area was hit by the Mw 6.9 Loma Prieta earthquake, the narrator explained that he was worried about a close relative who lived in the epicentral area.  Phone calls were not going through.  Not too long after his failure to communicate, however, he got a call from an out-of-state relative, claiming that the SF relative "was fine," and they knew this because he had "stood in line" to send a radiogram.

This is exactly how the out-of-state contact concept is supposed to work.  It may or may not be a radiogram.  These days it might be just that one cell phone call you can get through at the time.  Either way, you should have a contact whose info you have with you, who can inform the rest of your extended family.

We all took the opportunity to congratulate Grant Gemel KK6AHZ, who was appointed the ARRL Orange Section Traffic Manager (STM) only the day before.


Posted by Kate K6HTN at 1:45 PM No comments:
Email ThisBlogThis!Share to TwitterShare to FacebookShare to Pinterest 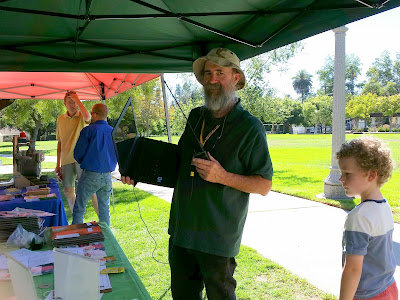 I encountered this fellow, Tim Eldridge KF6TIM, at the Bungalow Heaven Neighborhood Association emergency preparedness fair, in Pasadena CA.  He is a relatively new ham, licensed about six years ago, who now holds his Extra class license.  He is involved with the Altadena Local Emergency Radio Team (ALERT) and CERT.  What he was doing at the event opened my mind up to myriad possibilities applicable to ARES, NTS and other emergency communications applications.

With a laptop in one hand and a Kenwood TH-D72A handheld transceiver in the other, connected with a USB cable, he is basically a pedestrian mobile packet WL2K station.  This radio has an on-board 1200/9600-baud TNC, along with GPS, APRS and other features.

With an after-market antenna on the Kenwood, he was able to connect solidly on 5 Watts,  with the 2-meter packet WL2K gateway KF6TIM-10, located 3.0 miles away, as long as he stayed away from the trees.  With a mobile or small base antenna, he certainly could have done better.

Posted by Kate K6HTN at 6:02 PM No comments:
Email ThisBlogThis!Share to TwitterShare to FacebookShare to Pinterest
Home
Subscribe to: Posts (Atom)

Kate K6HTN
I am a retired seismologist. I am very interested in amateur radio, especially as it applies to disaster preparedness. My main focus is on message traffic handling (more or less, text messaging without any of the infrastructure). I also have a bunch of dogs that are my best buddies. I have not used this blog in years and recently "started over" by deleting all the old posts. Maybe I will teach you how to be a traffic handler!